10 Things You Didn't Know About The Majestic Painted Hall 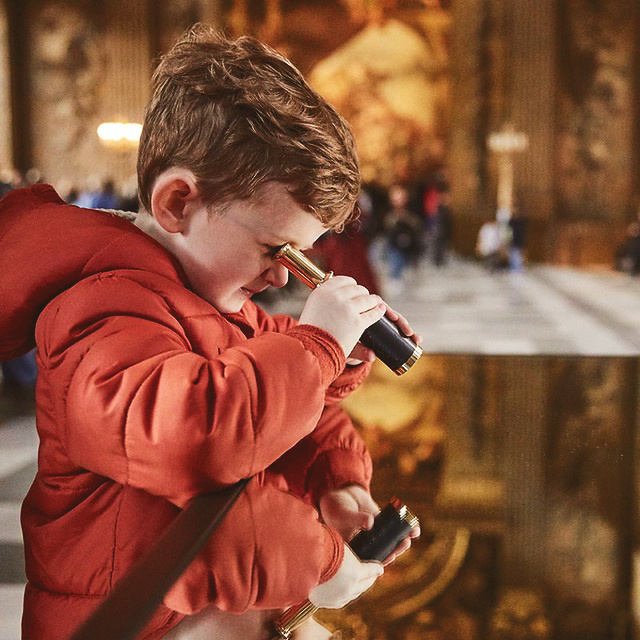 Where better to tuck into a delicious afternoon tea other than the delectable Painted Hall? From just £5.40 you and your royal highnesses can dine on scrumptious sweet and savoury treats fit for a King and sip unlimited tea all afternoon long!

Covering 4,000 square metres, the wonderful Painted Hall is regarded as a masterpiece of English Baroque arts. Young history buffs and mini Michelangelos will be fascinated as they learn how artist Thornhill created the Painted Hall and meet the many characters, including the gods and heroes, shown on the ceiling. This hidden gem is also hiding some pretty unique secrets and lucky for you, we are here to reveal them!

So whether, you're tucking into some royal afternoon tea or simply marvelling at the works of art, you'll always be one step ahead!

Starting from just £5.40, you and your mini princes and princesses can tuck into some royally good tea. Kids and adults alike will enjoy the selection of finger sandwiches, mini tartlets, scones, cakes and more, all whilst taking in the incredible surroundings. Plus, with Kidadl, when you book the afternoon tea and entry combo voucher, you get unlimited re-entry for a year - now that's something you simply can't miss!

Often described as UK's Sistine Chapel, the hall was initially intended to be a dining hall for the naval veterans who lived at the Royal Hospital for Seamen - that's a canteen if we ever saw one!

Initially, when the hall was painted by Thornhill the naval veterans were moved downstairs. After it was finished they didn't want to move back since they deemed it to be too grant for them. As a result, the majestic space became a tourist attraction the retired sailors were employed as tour guides.

4. From a quid to riches

5. The paintings truly haven't been touched in decades

As a matter of fact, it's been almost 60 years since the paintings in the hall were last cleaned, so we don't recommend getting too close!

6. Selfies before they were mainstream

On your travels round the museum, look really carefully at the West Hall of the Upper Hall, and you will find James Thornhill's self-portrait among the crowds - think of it as an alternative Where's Wally!

If you recently watched the film The Favourite with the hugely talented Olivia Colman, then you might be able to spot Queen's Ann portrait with her husband prince George of Denmark on her side!

Hidden in the background of the West Hall see if you can spot the mural of the iconic dome St Paul's Cathedral, which was designed by the famous Christopher Wren who also designed the Old Royal Naval College - bet you didn't know that!

9. You can discover all four continents!

On the edges of the Upper Hall ceiling you will find four figures, each one representing the continents known at the time: Asia, Africa, Europe and America - you could say that things have changed just slightly since then!

During 1700's, one of the contractors who worked on the ceiling put his signature on Queen Mary's chest - guess that's one way to leave your mark!

Ting Dalton and her family love going on adventures at home and abroad. She lives in Surrey and is mum to two boys under seven. Some of their favourite spots in the local area include Box Hill and their fantastic activity trail. Ting also has a huge passion for travel and food, and her ultimate dream is to taste her way around the world!