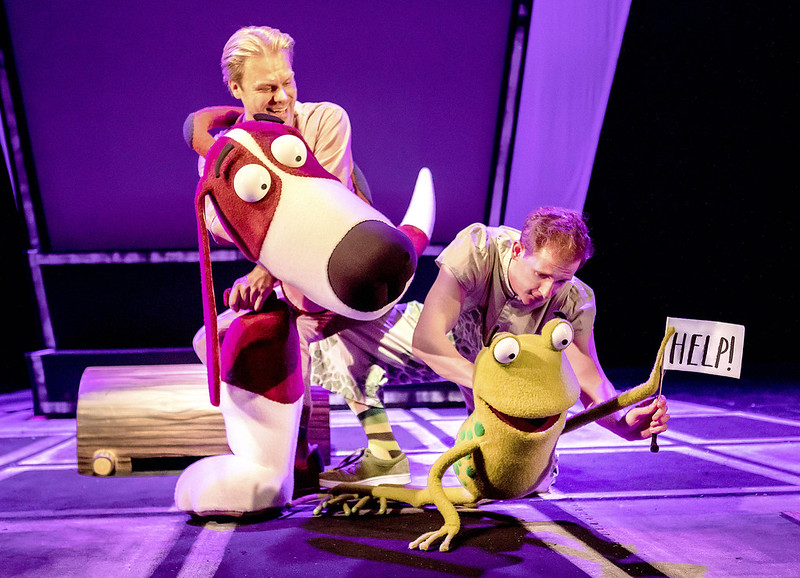 Have you ever listened to a gnu singing the blues whilst in a canoe? If not this could be your chance! We’ve just returned from a brilliant outing to see Oi Frog & Friends Live and it got a huge thumbs up from us all.

My kids love the Oi Frog and Oi Dog books which are a rhyme-filled delight, but I was wondering how these would be translated in more of an immersive format which would engage an audience of under 8s on stage. What transpired was a journey through the imagination, taking the main characters and rhymes from the book and spinning them into a technicolour riot of song and laughter (with plenty of jokes for the parents as well as the kids)!

The show is as bonkers as it is funny and eccentric and that’s what makes it magical for kids and adults alike. Fast-paced, the whole hour length show is based on the animals attending the “Sittingbottom School” where Cat helps enforce (a comically oversized) book of rules regarding where everyone should sit.

A TV commentator, who happens to be a Meerkat, leads the audience through the show’s narrative with his take on “Meerkat TV”. Our favourite scenes included a hugely bombastic cheetah singing about his love for a fajita, a cat acting out some of the hilarious escapades over her nine lives and the poor old blue whale navigating his bed of nails. These, coupled with some hilarious infomercial ads (eg for a cream to help Cat’s poor gnat-bites) were a touch of comedic class.

Frog also goes on his own journey through the show - from the new amphibian on the block to a rule-breaking renegade who develops a hilarious case of “rhyme-fever” which leads him to take quite the power trip. He and Cat don’t get off to the best start with their different interpretation of “the rules” but  finally resolve their differences with a very happy, and melodic ending.

Aside from the characters it’s worth noting that the staging is really inventive too. There is a large interactive board (the likes of which kids will be used to at school and nursery) which the animals use to write on, and which also doubles up as an awning for a store front and restaurant. Characters end up mingling with the audience at various points in the show and huge multi-coloured beach balls are thrown around the audience (sit in the stalls if you want to partake) during a particularly rousing song. Dog and Frog are also puppets, that move convincingly across the stage and have been rendered to look just like the book which my kids loved.

It’s worth noting that plenty of boosters were available at the theatre (which gave my toddler an excellent view of the stage) and that there is no interval to this hour-long performance. Afterwards we made a day of it by heading for a fantastic dim sum lunch in neighbouring Chinatown and popping into M&M world in Leicester Square to buy a few festive gifts.

A brilliant day was had by all and Oi Frog & Friends is honestly a show not to miss. Inventive, funny and magical in equal measure - and something that takes the kids’ imaginations on an amazing journey that takes the books to a whole other level. It’s a Christmas cracker for the school holidays and if you’ve got kids who love the book and you’d be ribbiting mad to miss it!

Born and raised in London, Hannah loves nothing more than seeking out the best in family fun for her 3 boys aged 6 and under, from outdoor adventures to all things transport, tech and time-travel! Hannah's passion to uncover the very best of family-friendly London led her to co-found Kidadl with fellow mum and family-explorer Sophie Orman.

The Ultimate Guide To Family Shows In London This Christmas

India Garrett
Things To Do
Under 5s

Kidadler Review: The Lion, The Witch and The Wardrobe